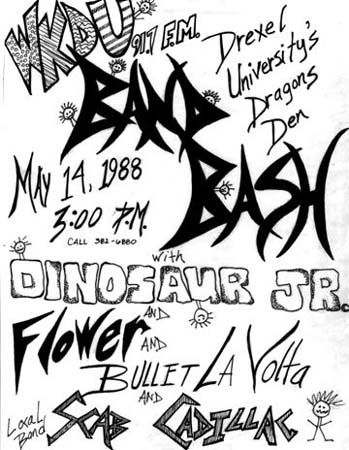 Apparently this brilliant recording has just been sitting out on Freedom Has No Bounds since 2010 and I am only now seeing this. How does this happen?  It looks like this was a recording for the station and it sounds pretty good.  “Yeah We Know” kinda falls apart and then they go into “Lose” for track five. My only complaint of this show is that it is only 7 tracks!  New to me and I don’t think it was up on FreeSoFree yet.

via freedomhasnobounds.com  “Here is the first of my live tapes this one is from a WKDU band bash from May, 14 1988. It was a great show with Scab Cadillac (I plan on putting up their 7″and album sometime later), Bullet LaVolta (from Boston right after their first ep) and Flower (from New York – members of Flower later formed Versus) all opening up for Dinosaur. This show was after You’re Living All Over Me but Pre-Bug and Lou Barlow’s departure. I’m really not sure why I didn’t tape the entire show but at least I have the Dinosaur part. I might have only had one tape with me – I was supposed to interview Dinosaur for KDU but they showed up in a beat up station wagon and barely said a word so I skipped the interview (Plus SST did not tell them about the interview anyway).”

There are also some other quality shows over there from Nirvana, Black Flag  Fugazi, Firehose, Guided By Voices, Sebadoh, Jesus Lizard….